Pydroid 3 is the most easy to use and powerful educational Python 3 IDE for Android.
Download APK
0/5 No votes
Report
Developer
IIECVersion
1.01
Updated
February 21, 2018Requirements
4.4 and up
Size
36MBGet it on

Pydroid 3 is the most easy to use and powerful educational Python 3 IDE for Android.

Features:
– Offline Python 3.6 interpreter: no Internet is required to run Python programs.
– Pip package manager and a custom repository for prebuilt wheel packages for enhanced scientific libraries, such as numpy, scipy, matplotlib, scikit-learn and jupyter.
– Examples available out-of-the-box for quicker learning.
– Full-featured Terminal Emulator, with a readline support (available in pip).
– Built-in C, C++ and even Fortran compiler designed by n0n3m4, an author of C4droid, specially for Pydroid 3. It lets Pydroid 3 build any library from pip, even if it is using native code. You can also build & install dependencies from a command line.
– Cython support.
– PDB debugger with breakpoints and watches.
– Kivy graphical library with a shiny new SDL2 backend.
– PyQt5 support available in Quick Install repository along with matplotlib PyQt5 support with no extra code required.
– Matplotlib Kivy support available in Quick Install repository.

* Features marked by asterisk are available in Premium version only.

Quick manual.
Pydroid 3 requires at least 170MB free internal memory. 200MB+ is recommended. More if you are using heavy libraries such as scipy.
To run debug place breakpoint(s) clicking on the line number.
SDL2/Kivy is detected with “import kivy”, “from kivy“ or “#Pydroid run sdl2”.
PyQt5 is detected with “import PyQt5”, “from PyQt5“ or “#Pydroid run qt”.

Take a part in development of Pydroid 3 by reporting bugs or providing feature requests to us. We appreciate that.

The list of libraries we are NOT planning to add yet:
– Tensorflow
– OpenCV
– Tk/Tkinter or any libraries having it as a dependency (e.g. “turtle”)
– Pygame

As Pydroid 3 main goal is to help user learn Python 3 programming language, our first priority is porting scientific libraries (so system-related libraries are ported only when they are used as dependencies of some other educational package).

Important notice:
Some users experienced major problems when installing libraries from QPython 3 QPypi internal repository, so consider it to be binary incompatible with Pydroid 3. If you need any libraries that cannot be built with Pydroid 3 – contact the devs directly: other binary repositories are likely to be incompatible as well.

Legal information.
Some binaries in Pydroid 3 APK are licensed under (L)GPL, email us for the source code.
GPL pure Python libraries bundled with Pydroid 3 are considered to be coming in the source code form already.
Pydroid 3 doesn’t bundle any GPL-licensed native modules to avoid automatic import of them. The famous example of such library is GNU readline, that can be installed using pip.
Android is a trademark of Google Inc.

Added an option to disable insertion of quotes/braces 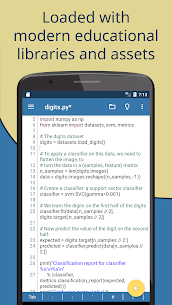 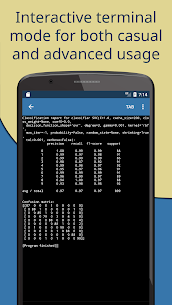 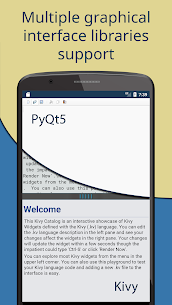 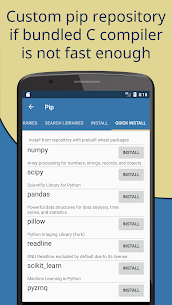 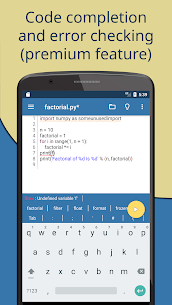